The Crocodile and Alligators

As every one knows, Crocodile and Alligators live in lake and rivers, some of them even live in sea near the mouths of rivers.There are several kinds in hot countries of the world, Crocodile have blunt nose  and live on animals,and Alligators have long thin snouts and live on fish ,A Crocodile with till an animal comes down to drink. Then it's seizes it by the nose or leg and drags it under water.or if the animal does not comes quite to the edge it will turn and kick it out with a swish of its strong tail.When it kill the animal it does not eat it at once.It prefers to drag it into a hole under the bank and keep it there till it goes bad!

Most of the "crocodile skin"you see in shows comes from Alligators.It would be impossible to shoot enough wild ones, so they are bred on Alligator farms and killed at the right age,before their skin  becames to stiff and hard. 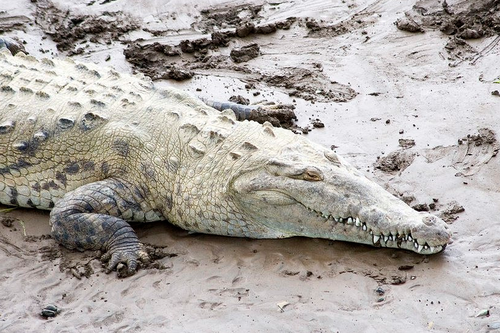